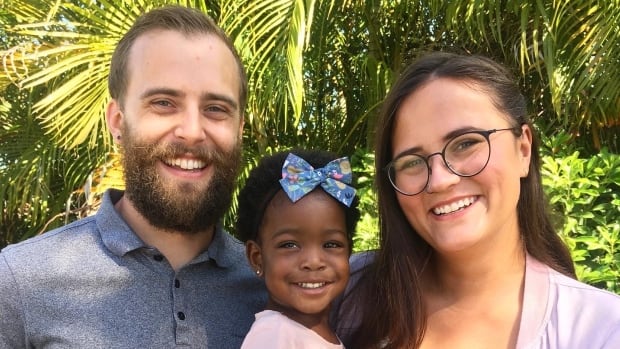 When Derek and Emilie Muth left Calgary to adopt their daughter Zoe in Nigeria last October, they had no idea that nearly a year later — after a terrifying medical ordeal and the onset of a global pandemic — they’d still be stuck abroad with no word on when they can come home.

That’s because despite their 2½-year-old daughter’s adoption being completed, her citizenship is not yet finalized. Canadian immigration staff have been repatriated from the only government office in West Africa that can finish processing their paperwork.

The family has gone months with government officials seemingly not even opening their documents, according to an access-to-information request, and, until CBC News reached out, no reply from the immigration minister to their urgent requests.

They still have no update on their application.

We definitely feel forgotten and left behind.– Emilie Muth

“This family has done every single thing that every authority and every expert has recommended to them in order to comply with the federal, the domestic, the international laws, and they are just stuck,” said Alicia Backman-Beharry, a lawyer who is representing the family pro bono.

“If there’s anything that can be done to have their file reviewed in a timely fashion, it is going to make a difference in a toddler’s life. She’s not getting the medical care that she requires right now.”

A spokesperson for Immigration, Refugees and Citizenship Canada said Zoe’s application has been identified as a priority and officers continue to assess applications, but the Canadian High Commission in Accra, Ghana, is currently limited in its processing capacity.

“The adoption is complete. It’s legal. It’s done. We’re just waiting on a visa to come home. It’s been 10 months, and we haven’t been able to work. We’ve been away from our family. The pandemic has been really scary, navigating that abroad. She has a lot of medical difficulties,” Emilie Muth said. “We definitely feel forgotten and left behind.”

Derek Muth said they started their adoption journey in 2017.

His wife is a nurse who has worked with children with blood disorders, so when they heard of a child with sickle cell anemia in government care in Nigeria, it seemed like it was meant to be.

The couple finalized Zoe’s adoption in Nigeria on Oct. 28, 2019, and shortly after submitted the second part of her application to the office in Accra, which would grant her Canadian citizenship and the ability to enter Canada.

The same week as the second and final part of their application was submitted, Zoe contracted a life-threatening infection, leading to sepsis, and severe anemia requiring a blood transfusion.

The quality of health care in Nigeria was poor, and while Derek Muth was able to donate blood to Zoe — saving her life — both father and daughter contracted malaria.

A doctor at the hospital recommended the family leave the country for Barbados, as it’s one of the few countries that allows Canadian and Nigerian visitors to stay for months without visas, so they could receive better medical care for Zoe.

The family arrived in Barbados in mid-December, after receiving permission to travel from Nigerian adoption authorities. Zoe’s condition improved somewhat, and the family continued to communicate with the office in Accra, waiting for their daughter’s citizenship to be finalized.

Then the pandemic hit.

We’ve really taken a beating as a family. We need help.– Derek Muth

In February, the Muths asked the Canadian High Commission in Barbados for help to get home, given Zoe’s medical concerns that put her at additional risk if she catches COVID-19.

Barbados gave residents and visitors just 24 hours’ notice before the country went into full lockdown. The family couldn’t leave their apartment or access groceries — they spent weeks eating just the canned food they had in their cupboards.

Alberta Children’s Services requested an expedited review of the family’s case from the Accra office, but no action was taken.

By May, no flights home were available. The family was told that they had just two days to make it onto a repatriation flight. They quickly filed a visitor visa request but were denied.

Their requests for a compassionate grant of a temporary resident permit or visa have been denied. They haven’t heard from the office in Accra since April. Two other families who were also in West Africa have received completed applications and have been able to return home.

“We’ve really taken a beating as a family,” said Muth. “We need help.”

Not including their initial costs to travel to Nigeria and complete the adoption, they’ve spent nearly $70,000 waiting to return home. That figure includes Zoe’s health-care costs, which have been entirely out of pocket.

The family may not be able to stay in Barbados much longer.

They’ve been granted a second visa extension until the end of November. After that, they’ll likely be forced to return to Nigeria, a country that Canada warns against travelling to due to the risk of terrorism or kidnapping, and where they may not be able to access proper medical care for Zoe.

If they can stay in Barbados, the situation isn’t much better — every day abroad costs the family more, and access to medication on the island is uncertain given the pandemic. There have been times the island has run out of Zoe’s medications since the lockdown.

Soon, Muth will likely need to return to Canada for work, leaving his wife to navigate Zoe’s care alone.

“I feel emotional talking about that because we worked so hard at building trust with her and attachment … so leaving her, one of us having to leave her, it feels really hard,” Emilie Muth said through tears.

No updates to their application

In mid-September, after CBC News reached out, the Muths finally received a reply from the immigration minister’s office after months of sending letters.

“Due to the impacts of the novel coronavirus (COVID-19) pandemic, IRCC is unable to provide processing times for applications at this time. Please rest assured that you will be contacted when there are updates to this application,” the letter read, acknowledging that the response was likely not what the family “had anticipated.”

“Understandably, adoptive parents are anxious to complete the adoption process as quickly as possible,” a spokesperson for IRCC told CBC News but added that time frames can vary widely from case to case.

The IRCC spokesperson also said that the government is obligated under international conventions to ensure children are not trafficked or removed from their biological families without legal consent, and the process is a complex one.

‘Health of child is in jeopardy’

An access-to-information request filed by the Muths for the notes from IRCC’s centralized Global Case Management System shows the second part of their application (filed in November) seemingly hasn’t been started, and documents that show the adoption is complete do not even appear to have been opened, as there are no substantive updates to their file.

None of the letters the family sent between March and August requesting updates, nor multiple letters of support sent from an MP, Alberta Children’s Services and International Adoption Services, are recorded, either.

There’s a comment on the file that states “email sent to visa office as health of child is in jeopardy because of lack of access to medication” — but no response from the office in Accra.

“If Canada truly valued the best interest of the vulnerable, they would prioritize this adoption. Otherwise, we’re just paying humanitarian lip service in this country,” Derek Muth said.

Mike Long, director of communications for Alberta Children’s Services, said in an emailed statement that staff have been working with the Muth family and have advocated on their behalf to the immigration department.

“It is now up to the federal government to work with the family to get the necessary documentation to return to Canada,” he said.