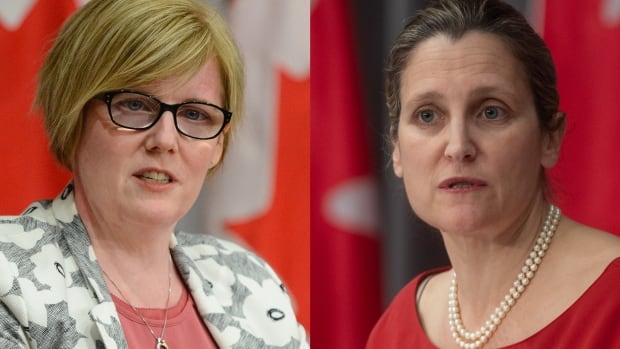 “I think we’ve created, in Bill C-2, a much more elegant balance between the need to not disincentivize work, but also support people who, regardless of effort, still aren’t working or have significantly reduced hours,” she said.

Qualtrough said the past few months have exposed gaps in the EI system, which is why the government wants to modernize it to better reflect Canada’s current labour market.

Measures in today’s legislation offer greater flexibility on the work hours required for the EI benefit, making it easier for people to qualify for a one-year period.

Canadians who already were eligible for EI will transition to that program when CERB winds down this weekend, while those who don’t qualify can apply for new “recovery” benefits.

Self-employed or gig workers, for example, can receive up to $500 a week (up from $400, as it was initially announced) for up to 26 weeks if they have stopped working or lost income due to COVID-19.

The Conservatives have said they won’t support yesterday’s throne speech, while the Bloc Québécois has said it won’t support it unless the government boosts health care transfers to the provinces with no strings attached.

NDP Leader Jagmeet Singh said he wanted to see the government follow through on its promise to provide a 10-day national sick leave benefit and ensure that no one loses out during the transition from CERB to EI, or to other recovery benefit programs.

Speaking to reporters after question period today, Singh called the boost to $500 a week from the proposed $400 a “major victory” for Canadians but added he still has concerns about how accessible the paid sick leave will be. He refused to explain in detail what he is asking for, saying that negotiations with the government are ongoing and those talks could affect the entire bill.

Singh also declined to say if the NDP would support the throne speech. The government needs the NDP’s support to survive a confidence vote and avoid an early election.

“We’re very optimistic about the outcome of these negotiations. Things are looking good. If they work out, we will be prepared to vote for this proposal, this legislation, then we will advise you as the next votes come up. We will let you know about those votes,” he said.

Under the new regime, those workers can continue to earn money while receiving this benefit but will be required to repay 50 cents of every dollar earned above $38,000.

A second new benefit will provide 10 days of paid sick leave to any worker in Canada who falls ill or has to self-isolate due to COVID-19. That benefit is worth $500 a week. No one can claim this benefit and another sick leave payment at the same time.

That sick leave program was negotiated with the provinces and territories under an agreement to restart the national economy safely.

A third benefit will support Canadians who must stay home to care for a child under 12 or another dependent because their school, daycare or other day program facility has been shut down due to COVID. People who choose to keep their kids home even when those facilities are open will not qualify unless they provide proof of a medical reason to do so, such as an immunodeficiency disorder.

The recovery benefits require parliamentary approval, but the government aims to open applications in October, with benefits flowing in three to five days.

Qualtrough stressed the “urgency” of getting the benefits to Canadians in need, and said she hopes MPs from all parties will swiftly pass the bill.

Employment Minister Carla Qualtrough stresses the consultations she has made with her opposition critics in an effort to get their support for her bill. 0:31

“I’ll leave the House strategy to the experts on that, but I can assure you I’m doing my part, working with my colleagues across the aisle to make sure this is collaboratively brought forward and supported by everyone,” she said.

“Failure to extend the legislation we are putting forward today could disrupt these payments, with very harmful consequences for people’s lives, for families and for businesses across the country,” she said.

Conservative employment critic Peter Kent accused the Liberals of trying to “ram through” the legislation to distract from a throne speech that didn’t address the needs of millions of Canadians.

“Millions of Canadians are still unemployed and eager to return to work. Businesses want to reopen and welcome back staff and customers. But instead of showing leadership and presenting Canadians with a clear path forward through the pandemic, the Trudeau Liberals continue to let Canadians down,” he said in a statement, vowing that the Conservatives will present a plan that will keep Canadians safe, protect jobs and get the country back on track.