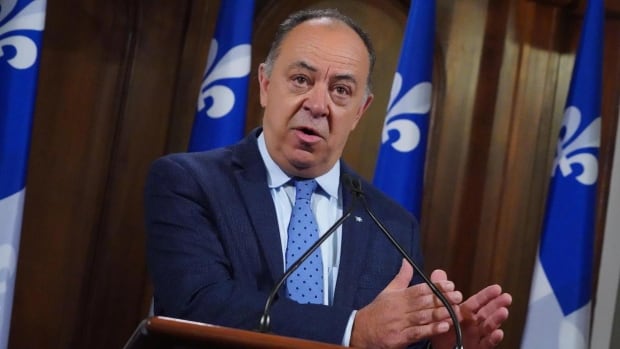 The residents of Montreal and Quebec City are being urged to reduce their social activities to a minimum and face a host of new restrictions as the provincial government tries to curb a rapid increase in cases of COVID-19.

Quebec’s two largest cities, and parts of the Chaudière-Appalaches region, which is south of Quebec City, will be under “moderate alert” beginning at midnight.

That is the orange, or second-highest, alert level under the province’s regional system for categorizing the danger posed by the novel coronavirus.

Quebec reported 462 new cases of COVID-19 on Sunday and 427 new cases on Saturday. The province hasn’t seen similar daily increases since late May. Hospitalizations have been increasing at a slower rate, and are now at 138, up from 124 a week ago.

At a news conference on Sunday evening, Health Minister Christian Dubé announced several new public health rules for residents in the orange zones. These include:

In green and yellow zones across Quebec, the maximum number of people who can attend a gathering in a place of worship, a rented hall, or festival is now 50.

It was also announced that the regions of Lanaudière and Laurentides have been upgraded from green to yellow.

In announcing the new measures, Dubé said the government was concerned about the rising caseload and the pressure it was placing on the health system.

Addressing residents in the orange zone, he said: “I’m asking you to reduce your contacts to a minimum.”

Dubé said if people living in orange zones respect the new restrictions and avoid contact with others as much as possible for the next few weeks, the situation will improve.

“We saw in the first wave that Quebecers respected the rules and we are confident that they can do it again,” he said.

He asked residents in these zones to limit suppers with friends and family as well as any unnecessary travel within the province.

​Dubé also specified that while the island of Montreal has been raised to a moderate alert, Laval and the Montérégie region remain yellow.

He also asked that people living in orange zones refrain from going to get tested as a precaution. He said an influx of people getting tested without symptoms or having had contact with someone infected is causing delays at testing centres.

Quebec has unveiled a new, colour-coded COVID-19 alert system. Here’s how it works. 2:11

The measures also put new restrictions on who can visit long-term care homes, where the vast majority of deaths occurred in the first-wave of infections.

In public long-term care centres (CHSLDs), only visits for humanitarian reasons or by caregivers will be allowed.

A maximum of six people, including the resident, will be allowed inside an apartment in a private seniors’ residences (RPA).

Public Health Director Dr. Horacio Arruda added that this change will not affect schools or extra-curricular activities in the province.

“The situation is very worrying but we haven’t lost control,” he said. “We collectively can change things, but the power is in your hands.”

Christopher Labos, a Montreal cardiologist and epidemiologist, said the new measures appear to be targeted at the types of activities public health officials believe are responsible for the recent increase in infections: large gatherings in homes and bars.

“Any time you have a large number of people coming together, especially in situations where people tend not to wear masks and tend not to practice social distancing, those are the situations in which the virus can spread and spread quickly,” Labos said.

“The real objective here is to try to limit those types of events, what are often called super spreader events.”