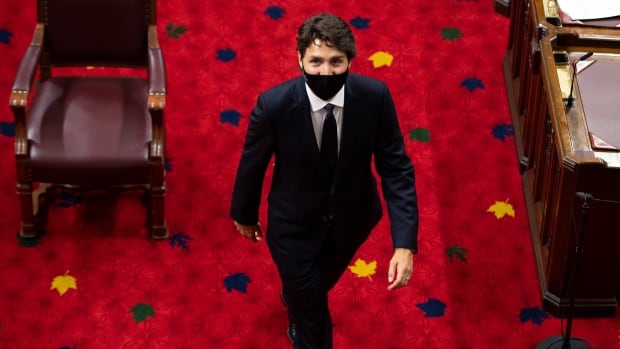 Prime Minister Justin Trudeau will speak to the nation in a rare televised address tonight, after his government outlined an ambitious plan to protect Canada from a worsening pandemic and build back an economy ravaged by job losses.

The major broadcast networks have agreed to hand over nearly 30 minutes of airtime for Trudeau to speak directly to Canadians at a time when COVID-19 cases are spiking — particularly in Ontario and Quebec — and the economy is shaky.

Following Trudeau, the opposition leaders will have a chance to respond. The logistics of that response could be challenging, now that Conservative Leader Erin O’Toole has COVID-19.

Gov. Gen. Julie Payette began the 150th speech from the throne by explaining how these four ‘foundations’ can help the economy recover. 1:53

In that speech, the government pledged to create one million new jobs, extend the wage subsidy program until next summer, launch the largest jobs training program in the country’s history and begin to build a national child-care program to support working women.

The Liberal government also promised to push ahead with plans to create a universal pharmacare program with any provinces willing to take part.

“The economic impact of COVID-19 on Canadians has already been worse than the 2008 financial crisis. These consequences will not be short-lived. This is not the time for austerity. Canada entered this crisis in the best fiscal position of its peers and the government is using that fiscal firepower,” the government said in the speech.

The Bloc Québécois and Conservative parties promised Wednesday to vote against the speech.

If NDP Leader Jagmeet Singh and his caucus also vote against the speech, Canadians will be headed to the polls for a fall federal election.

Singh told reporters that he had not yet decided how his caucus will vote when it’s given the chance in the Commons in the days ahead.

“We’re going to take a lot of time to consider the throne speech and make sure we evaluate it and make a decision around whether we’re supporting or not,” he said.

He said he’s troubled by the Liberals’ pitch to do away with the Canadian emergency relief benefit (CERB) in favour of a revamped Employment Insurance (EI) system, warning it could hurt workers who have been forced to stay home because of the pandemic.

The speech said little about the oil and gas sector — an industry that has been hit hard by sinking oil prices and dwindling demand, leaving thousands jobless.

“There were no words that said, ‘We value natural resources, we value our forestry workers, we value our agricultural sector.’ They should have said all that and they didn’t. We were hoping for something better,” she said. “Conservatives continue to be the only party standing up for the West.”

The speech included big-ticket spending promises with no plan for pay for them — which Bergen dismissed as irresponsible.

“They’re still talking about how budgets will balance themselves, so it’s very, very concerning,” Bergen said, citing Trudeau’s claim from years back that a growing economy would reduce federal deficits.

Bergen said the speech offered little new material — “just grand gestures and empty promises” — and the prorogation of Parliament to deliver the speech was a naked attempt to shield the Liberal government from further parliamentary inquiry into the WE Charity scandal.

Asked if it was responsible to push Canadians closer to an election during a pandemic, Bergen said Canada is a democracy and Tories have the right to vote against a speech that fails to address their priorities.