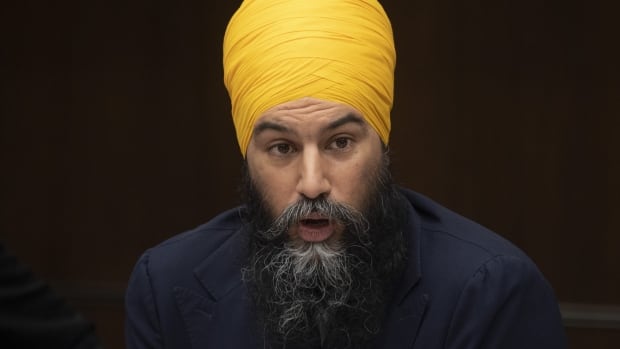 The fate of the Liberals’ minority government now hangs in the balance, with the Conservatives saying they can’t support the throne speech and NDP Leader Jagmeet Singh and Bloc Quebecois Leader Yves-François Blanchet setting conditions for their party’s support.

The throne speech will face a confidence vote in the House of Commons. If the government loses that vote, it falls — and a general election is underway.

The Conservatives made their position known right after the speech, saying that there was no way their party could vote confidence in the government.

“We are very, very displeased with this speech from the throne. We are very concerned that there’s no fiscal framework. The only thing that Canadians can be guaranteed of fiscally is there will be more debt.”

Conservative Deputy Leader Candice Bergen told reporters that her party has many reasons not to support the speech when it comes to a confidence vote in the coming weeks. 1:20

For the Liberal government to survive a vote of confidence in the House, it must have the support of at least one of the opposition parties. With the Conservatives ruling out their support, the Liberals will need the backing of either the Bloc Québécois or the NDP.

Blanchet is currently in isolation, having tested positive for COVID-19. He made a televised address earlier this evening following Prime Minister Justin Trudeau’s address to the nation, giving the prime minister a week to either meet his demands or risk the Bloc voting against the speech.

The Bloc leader decried the imposition of national standards for long-term care and the lack of a significant increase in health care funding for provinces.

“The Bloc agrees that this is an affront to the jurisdiction of the National Assembly of Quebec and does not warrant the support of Quebec,” Blanchet said. “Mr Trudeau has one week to provide unconditional transfers to Quebec for health care, otherwise the Bloc Québécois will vote against this throne speech.”

NDP Leader Jagmeet Singh said going into the speech that before his party agrees to support it, he’ll need to see the Canada emergency response benefit (CERB) extended and paid sick leave offered to every employee across the country to ensure no Canadian has to go to work sick.

It is a message he repeated to reporters after today’s speech was delivered in the Senate.

“We are making it very clear to the prime minister — if you want [NDP] support, if you want my support, then you have to stop the proposal to cut help to Canadians who cannot get back to work and make sure you put in place paid sick leave for all Canadian workers,” Singh said.

NDP Leader Jagmeet Singh spoke to reporters about items he wants the government to do before he will support the speech in a confidence vote. 1:10

Singh was reacting to the part of the speech that said the CERB was going to be phased out and that people receiving it would be transitioned over to the Employment Insurance system.

The EI system pays 55 per cent of a person’s income, to a maximum of $575 per week. The CERB pays out a maximum of $500 a week. But because EI is taxable at the source at both the provincial and federal level, and is based on income, the payment can be significantly lower per month than the CERB, which is taxed as a part of someone’s total income at the end of the year, rather than before the payment is sent out.

Singh said that cutting the incomes of people who can’t find work is unfair. It’s not clear if that is what would take place.

The Liberals said in the speech that while people receiving the CERB would be transitioned to the EI system, a new benefit — the Canada Recovery Benefit — would be created to ensure that people who would not have qualified for EI in the past are able to do so now.

The speech also says that the EI system will be reformed but does not say what that reform will look like.

“This pandemic has shown that Canada needs an EI system for the 21st century, including for the self-employed and those in the gig economy,” the speech said.

While there was no specific mention of paid sick leave in the speech, the Liberal government announced $1.1 billion to pay for sick leave as part of the government’s “safe restart” agreement. The program entails having the provinces use legislation or regulations to give workers 10 days of sick leave related to COVID-19.

The Federation of Canadian Municipalities has thrown its support behind the speech. Its president Bill Karsten released a statement calling the speech “an encouraging and hopeful signal for cities and communities, and … a clear statement that the federal government will be a partner to municipalities on the path forward.”

Goldy Hyder, president and CEO of the Business Council of Canada, said his organization would like to see a fall economic statement that restores economic confidence. Hyder said he welcomes the pledges in the speech to help the energy and resource sectors achieve their climate goals, and the pitches for a national childcare program and investments in digital infrastructure.

Dan Kelly, president and CEO of the Canadian Federation of Independent Business, said he broadly welcomes many of the initiatives signaled in the speech but does have concerns about possible reforms to the EI system.

“One of my biggest worries in the throne speech is the prospect for permanent changes to the EI system,” he said in a statement. “The self-employed needed pandemic support, but permanent EI coverage (and premiums) for entrepreneurs needs careful review and is fraught with landmines.”